Earlier today I happened to stumble across an online money-making app named the Tesler trading app which promised that I could “make $237 per hour just by testing software for 5 minutes”. 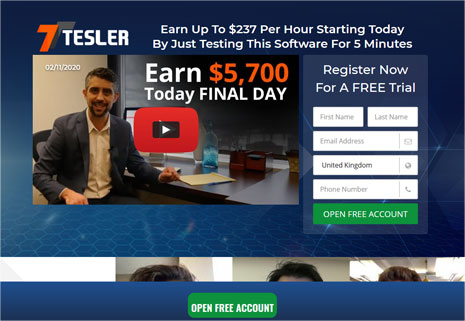 Naturally, I was pretty suspicious about it… I wondered, could you really earn $237 per hour just by testing software for 5 minutes? Or is the Tesler trading app a scam?

And so, as a result, I decided to do further research to find out.

In this Tesler review, I will be sharing what I found & I will be outlining why I believe that the Tesler app is actually a scam. On top of that, I’ll also be sharing a legitimate alternative.

What Is The Tesler Trading App?

The Tesler trading app is an app which can allegedly generate automated profits on your behalf.

You’re led to believe that all you need to do is sign up with a broker via the Tesler website & then activate the app. The app will allegedly begin making profitable trades entirely on your behalf.

From there you’re told that you can simply sit back & relax whilst the money comes rolling in.

But I think you’ll agree with me when I say that the whole thing sounds way too good to be true, right?

After all, if the Tesler trading app really worked as promised then why isn’t everybody using it? Why are people still working at jobs they dislike if the Tesler app can make them $237 per hour on autopilot?

The answer is because the Tesler app is a scam.

Yep, that’s right – it probably doesn’t come as too much of a shock, but the Tesler app does not really work as promised. It’s just a con that’s designed to part you with your cash.

If you keep on reading I will explain how it all really works below.

How Does The Tesler App Work?

The Tesler trading app is supposed to be built using futuristic technology which can detect profitable trends in the marketplace & place the trades on your behalf to generate you an automated income.

It sure sounds good, but there are 2 things the website promoting it fails to mention.

And the second thing it fails to mention is the fact that the broker you’re recommended to deposit with is a binary options broker.

Those 2 things combined are very bad news, and literally prove that it’s a scam.

You see, binary options brokers don’t work like normal brokers. Through a binary options broker you don’t “invest” in anything, instead, you simply place bets on whether you think the value of something will go up or down over a certain period of time (usually under 60 seconds).

This means that if you win (which you won’t), the broker must pay you your winnings out of their own pockets… So it’s therefore 100% in their interests for you to lose, not win.

In fact, if you keep winning, they would go out of business.

So with that in mind, ask yourself this… Why would a broker who only earns money when you LOSE money be paying commissions to the creator of an app which is allegedly guaranteed to make you win?

The answer is they wouldn’t.

And the real reason they’ve affiliated themselves with the creator of the Tesler app is that they know that the app has actually been designed to make you lose money, not make it.

The broker & the creator of the Tesler scam are both in cahoots together.

In the instance of the Tesler app, it definitely is.

Furthermore, the Tesler app website makes use of fake testimonials. The images displayed which are supposedly of “real members” that are profiting have actually been taken from Google.

And finally, a quick search for the Tesler app reviews reveals an overwhelming number of scam complaints. In some complaints, members even claim to have lost over $10,000.

Is The Tesler App a Scam?

Yes, the Tesler app is a scam. The app has been designed to trick you into depositing with an unregulated binary options broker so that the creator can earn a commission at your expense.

When you make a deposit (which I don’t recommend), you will be provided to the app as promised & it will appear to be generating profits, but it is not really connceted to any live markets.

The app is essentially just a video game & the profits are faked to encourage you to deposit more & money money in order to increase the so-called “profits” that you’re generating.

When you finally attempt to make a withdrawal you will discover the hard way that you have fallen victim to a scam & that the app was nothing more than a fraud. Not good.

You cannot make money with the Tesler app, but there are other legitimate ways that you can make good money online & one of the best ones (in my opinion) is something named affiliate marketing.

Through affiliate marketing you can get paid to promote products or services online for companies like Amazon & eBay & the best part is that there’s absolutely no limit on the amount you can earn.

So if you’re still looking for a legitimate way to earn money online I’d highly recommend you check affiliate marketing & one of the best places you can get started with it is a place called Commission Academy.

You can check it out here before you leave.

But whatever you decide to do, I simply hope that this Tesler review helped you to avoid the scam trading app. If you have any further questions or comments, don’t hesitate to leave them below.

This page may contain affiliate links which means the owner(s) of this website may earn from qualifying purchases. See full disclosure.